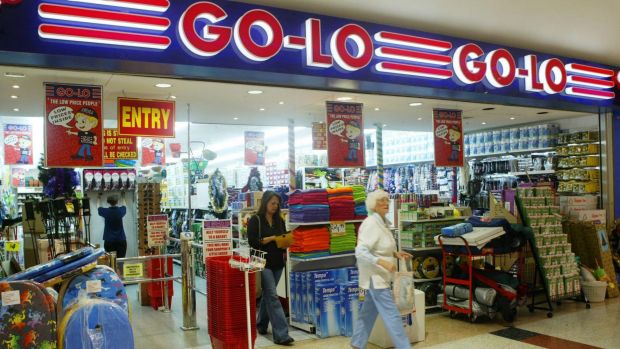 In the lead up to announcing the voluntary administration, Retail Adventures had already closed 29 of its Go-Lo, Crazy Clark’s and Chickenfeed. Go-Lo in Charlestown closed its doors earlier this week with customers picking up last minute bargains as stock was cleared from the shelves. More stores will be closed in the weeks that follow.

Retail Adventures Chief Executive, Penny Moss, has announced staff unfortunate enough to lose their jobs will be paid their proper entitlements and, where possible, offered alternate employment in stores that remain open. She said:

“The infrastructure and overheads of both the distribution centres and our head office are currently unsustainable. The restructure is necessary to preserve value for the creditors and make sure the business is financially viable in the future”

Retail Adventures will be restructured and will live on as Discount Superstores Group (DSG Holdings Australia Pty Ltd), under license from Deloitte. Deloitte will allow DSG to continue to operate the remaining 238 Sam’s Warehouse and Crazy Clark’s stores. In addition, 57 Chickenfeed and Go-Lo stores will be rebranded as Crazy Clark’s stores over the next few months.

What were the company’s three biggest mistakes?

As reported initially by SmartCompany.

Paid too much for a troubled asset

Jan Cameron, the founder of Kathmandu and once Australia’s fourth richest woman, acquired Retail Adventures in 2009 for $85 million. Many industry experts have claimed she paid too much for a discount stores company that was already struggling, at a time when retail sales were declining. In the years that followed the acquisition, retail sales in Australia took a significant hit, and have continued to do so.

Unless you are in the business of reconstructing failed businesses and have a specific rescue strategy well in mind, it is commercial suicide to purchase a struggling business, even at valuation price. The writing is on the wall. The business is failing or has failed.

Unless you have a clear understanding of why it failed and what you can do to return it to profit, there is simply no point in paying good money in the vague hope that you will succeed where others have failed.

Pursuing a discount strategy without understanding it

Cameron has openly admitted that she acquired Retail Adventures without knowing anything about the discount industry and left the responsibility of running the company to others. Margins within the retail industry are already being squeezed thin and margins are even tighter when it comes to discount goods. Over the last three years, since Cameron acquired the company, the margins on goods sold have continued to shrink which meant the stores had to make money by moving high volumes of stock. That strategy obviously has not worked and it’s a key sign that Cameron didn’t seek enough advice and support when making crucial strategic decisions.

One of the most often recited reasons for business failure is that the owners bought into a business about which they knew nothing. It is a sure fire recipe for failure and that is true right across the spectrum of commercial activity from large public corporations down to the micro level business partnerships of family restaurants and “Mum and Dad” sandwich shops. The story is always the same: the unsophisticated purchasers saw what they thought was a great bargain and formed an emotional attachment to the idea of running a business without knowing anything of the industry, its foibles, quirks, customers or supply chain, cash flow arrangements, working capital requirements or production/supply standards or the regulatory environment in which it operates. Some of these shortcomings can be overcome with the benefit of good strategic advice from alliance partners such as financial and legal advisers.

Ultimately, though, there is no substitute for knowing intimately what it is you are making or selling.

Being in business is a tough gig at the best of times. It is no place for the poorly equipped or the ill advised.

Since announcing the voluntary administration, Cameron has made bizarre claims about her staff and has even said that a former executive, Robert Atkins, had a personal ‘vendetta’ against her and that he was sacked for sexual harassment. She said:

“Some (staff) had a strange desire to run me out of money, thinking the company would get bought by the next sucker and they could continue on with their cruisy ways.”

Issues with attracting the right staff, managing them and retaining them will always drag a company down. Cameron failed to conduct a proper review of key staff members and then replace those that were not vital to the company’s success moving forward.

It almost follows that if you enter into a business which you do not understand, you will not have credibility with employees who have worked there and do understand it. You are thereby exposed to the risk of exploitation and poor decision making based on advice from those who do not respect you and whose interests are not necessarily coincident with yours. Nor is it usually a sufficient answer to say that you will import the expertise.

The staffing problems announced by the Director of Retail Adventures were not at all surprising.They are a normal incident of the deterioration of staff relationships consequent upon the failure of business.