› Blog Articles › Enduring Power of Attorney (EPA): Why it’s vital to seek advice from a lawyer who is a specialist 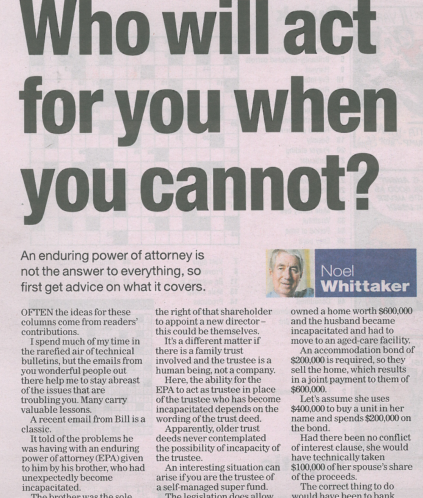 Noel Whittaker, a leading finance expert with over 25 years experience and the author of 17 bestselling books, recently wrote an article in the Newcastle Herald (22/11/2012) about the complexities involved in having an Enduring Power of Attorney (EPA). In the article he goes on to explain why it’s vital to seek advice from a lawyer who is a specialist in Estate Planning.

Noel makes reference to a letter he received from Bill, who had an EPA in place that was given to him by his brother. The brother was the sole director of his own business and was unexpectedly incapacitated and no longer able to run the business. Because Bill had an EPA he thought he could take over his brother’s business and run it. He was mistaken. In Noel’s words:

“An EPA cannot be used to delegate a delegation. If you held an EPA for a Qantas pilot it would probably enable you to operate his personal bank accounts, and even buy and sell shares and property. But it would not allow you to put on his uniform and fly his plane.”

The article goes on to list numerous complex situations that revolve around the appointment of an EPA and the huge costs involved in making a wrong decision during this process. Noel concludes the article by stating…

“This is why it is vital, where Wills and EPAs are concerned, to take advice from a lawyer who is a specialist in Estate Planning. The cost of that advice may be minuscule when compared with the potential problems.”

For over 40 years our specialist Estate Planning team has been helping clients avoid these situations by structuring their Will and EPA in a way that guarantees the best possible outcome. If you are thinking about appointing an EPA, or you’ve already done so and you want some advice regarding its structure, contact a member of our Estate Planning team today and we’ll ensure you don’t end up in an unfortunate situation… like Bill did.